Measuring the worth of a school

I sit in an office at Novi High School. Outside I hear the sounds of a marching band.

Today is the Novi High School Marching Band's Annual Fanfare. Marching bands from around the state come to compete against each other, demonstrating remarkable skills and providing quite a show. 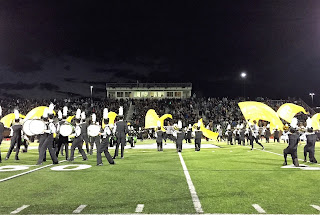 It is a culture that I know little about. I was never in a marching band. I played in my school's band from the fifth grade through the 9th grade. But the practice thing proved to be a stumbling block and when I went to high school I did not pursue band.

Looking back on it, that was probably a mistake. Why?

What I have learned as I watch the Novi High School Marching Band is that it is a tremendously powerful and positive culture. It requires a ton of work - marching band camp, lots of practice, learning not only music but how and when and where to move. At times the director, and at times the students, get frustrated.

But what these students do is tremendously important.

These students have a purpose, a goal, something that they can invest their time and energy in.

When measuring the worth of a high school it is important to remember that a test score is not the only, not the most important, and certainly not the single best factor to consider when deciding if a high school measures up.

Politicians pass laws that purport to be able to measure the worth of a school. Attendance, graduation rates, test scores. Those things are routinely measured and publicized.

I would suggest that there are many other ways to measure the worth of a high school. I would also suggest that being in a marching band may have a greater impact on future success than the performance on a state assessment.