Why baseball helps me think about assessment

I'm a baseball fan. I love the game.


I live in Michigan so I'm also a Detroit Tiger fan.


Last week the Tigers sent a relatively young and inexperienced pitcher to the mound to face the Los Angeles Angels, one of the best teams in the American League.


The results were not very pretty. Jacob Turner gave up seven runs in two innings. The Tigers eventually lost the game 13-0.


The most interesting part of the evening for me were the comments after the game. Jim Leyland, the Tigers manager, was quoted in the Detroit Free Press after the game:


"He's just a kid who in my judgment isn't quite ready for this yet," manager Jim Leyland said after the game. "Am I upset with Jacob Turner? No. I think I'm being perfectly honest when I say this kid in the future (will be) toward the top of the rotation or a top-of-the-rotation guy that's not seasoned enough (yet) to pitch at this level with consistency."

What Jim Leyland did was base his opinion on performance.

In schools we are called upon to assess students every day. On occasion, throughout the year, we have special assessment days - state assessments, national standardized assessments, and other end-of-course or end-of-year assessments.

These assessments give us information upon which we can base opinions about students.

What they don't do is give us the final verdict on students.

We might say, as Jim Leyland, did that a particular student, based on his or her performance, is not quite ready for the rigors of 4th grade or Algebra or Chemistry.

But we should also be quick to add, as Jim Leyland did, that a student has the potential to perform at a higher level. Helping that student reach their potential and perform at a higher level is what we are supposed to be able to do through education. My hope is that we never use the performance on one assessment as the final judgment on any student and that we keep in mind that performance can be changed through education.
Posted by Steve Matthews at 5:58 PM No comments: Links to this post

See the full gallery on Posterous
On vacation, we travelled through Oklahoma City. Visited the Oklahoma National Memorial. The empty chairs helping us remember the victims was very powerful.

After the tragedy students from around the country sent ceramic tiles voicing support. The Memorial created a wall with the tiles. Great example of how children help us heal.

Posted by Steve Matthews at 10:56 PM No comments: Links to this post

What RA Dickey and the knuckleball can teach me

RA Dickey is a pitcher for the New York Mets. He is having a wonderful year. He arguably has been the best pitcher in the National League during the first half of the 2012 season.

His effort was not rewarded with a traditional honor - being named the starting pitcher in the All-Staff Game.

Here is one explanation from Tony Manfred.

The baseball world sees Dickey and his knuckleball as a gimmick, an odd and fleeting path to effectiveness that automatically disqualifies him from the realm of great pitchers and places him his own separate and inferior category … The basic lesson is this: Greatness in sports is not about objective superiority, it’s about satisfying popular assumptions about what greatness ought to look like.


There’s an inherent bias against players who succeed differently.
This started me thinking about schools, teaching. learning, and our success.

Do we have preconceived notions of what greatness ought to look like and does that interfere with how we teach and how students learn?

In particular, this suggestion that RA Dickey is seen as inferior because he uses a knuckleball started me thinking about some of our obsessions in schools.

Good students, it is suggested, can do these things. Are these just traditional assumptions?

We now have spell check and word processing and Google. Students can access experts on their cell phone or tablet computer. No longer is the teacher the only source of knowledge in a classroom. Some of our traditional and popular assumptions need to be thrown out.

Maybe learning in the 21st century is more about learning to throw a knuckleball and less about fitting into preconceived, and often less effective, assumptions.


Posted by Steve Matthews at 3:30 PM No comments: Links to this post

New questions that we can't answer

Recently, at a conference, I heard Michael Wesch speak. He started his talk by summarizing the history of humankind.

His abridged version started 12,000 years ago. Each step he took across the stage represented 500 years of time. I don't remember exactly how he broke down the various stages of our development but one thing he said stuck with me.

The ability to ask questions about why we are here, what we are doing, and what we are meant to do is a recent phenomenon. Before that we, the human race, has been so focused on just surviving that we did not have time to be reflective.

3. Am I going to be able to make a difference?

Now our life is theoretically secure. For those of us fortunate enough to live in a developed country, and for many in the developing world, life is not about existing day-to-day. Instead, we can concentrate on asking ourselves bigger questions.

And suddenly we are not so secure.

Posted by Steve Matthews at 9:53 AM No comments: Links to this post

I recently had the good fortune to participate in an educational field trip to Japan. While in Japan I visited several schools. At one school I took this picture. What do you think is going on? 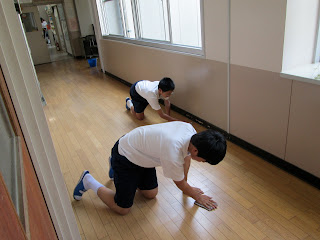 What did I learn on my visit to Japan? I learned that the Japanese have figured out how to create a sense of community in their schools.

One of the ways they do this is by assigning jobs to students. Some clean the floors - like these students. Others serve lunch. Others sweep. Others empty trash.

Every one does something.

It surprised me. It was routine to the educators with whom I was visiting.


This picture represents to me something that we have misplaced.


In our schools we often punish students by making them clean. We make taking care of the school something negative. Custodians do that we say. It's not my job we say. As a result our lunch rooms the floors are often littered with debris at the close of lunch. The attitude seems to be that it is someone else's job to keep my school clean.


That is definitely not the attitude at Hunan Junior School.


In the schools I visited during my stay in Japan I was impressed over and over again with how the Japanese took time to build a community. This picture provides just one small example of how that was done.
Posted by Steve Matthews at 9:21 AM No comments: Links to this post