What Led Zeppelin teaches us about school reform

Have you ever listened to a Led Zeppelin song backwards?

I hear they say all kinds of evil things.

Simon Singh has listened to Led Zeppelin songs backwards. He doesn't hear anything but gibberish.

Yet he is able to get me to hear things that are not there.

Listen to his talk. Then play your Led Zeppelin album backwards! Oh my!

Singh states, "Combine bad data with a big bias and the brain fills in the holes and you end up hearing something that's not there."

Which brings me to this editorial in the Detroit News. The writer states without qualification and without hesitation that only 17.8% of Michigan high school graduates were prepared for college. This data comes from the ACT College Testing data.

ACT in their "Reality of College Readiness" report state benchmark scores on ACT subject area assessments that "represent the level of achievement required for students to have a 50% chance of obtaining a B or higher or about a 75% chance of earning a C or higher in corresponding credit-bearing first-year college courses." (page 3)

Michigan's education dashboard promotes this number. Governor Snyder in his 2013 State of the State address stated that "only 17% of our kids are college ready." The Michigan School Data portal has a link to the ACT College Readiness results. Again, only 17.7% of students are viewed as college ready.

As Singh states: "Combine bad data with a big bias and the brain fills in the holes and you end up hearing something that's not there."

The state of Michigan could promote other data.

Some might counter that "I'll grant you they went to college but I bet they needed to take those remedial courses when they got there!"

The same Michigan School Data portal shows how many of the 2012 high school graduates needed remedial assistance when they entered college.

Well if only 17% of the graduates are college ready it must mean that 83% needed remedial assistance.

The numbers don't lie. And they are pretty good. (Click on the percentage tab under the title.)

So why would the Governor, the state of Michigan's education dashboard, and the Detroit News continue to promote this idea that only 17% of our high school graduates are college ready?

As Simon Singh says: "Combine bad data with a big bias and the brain fills in the holes and you end up hearing something that's not there."

So why does the Governor promote that our schools are doing so poorly?

Maybe there is an agenda and a bias against public schools. Maybe if public schools look like they are not doing a good job it will be easier to promote agenda items that favor schools of choice, charter schools, the Educational Achievement Authority, online learning, and other so called educational reforms.

I for one believe in our public school system. I think the numbers demonstrate that we are doing well.

Can we improve? Absolutely!

But to suggest that we are not preparing students to be successful once they leave high school is, in my opinion, irresponsible.

Posted by Steve Matthews at 1:08 PM 14 comments: Links to this post 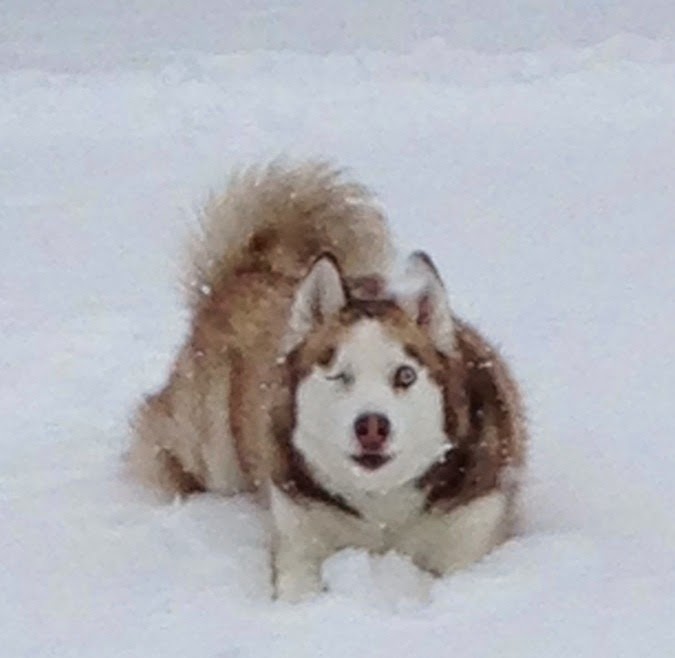 Kaya is a great dog. She likes to walk. She enjoys the outside. She loves the snow. She really loves her visits to Doggy Day Care.

She also happens to be blind. (If you look closely at the picture above you will notice that she only has one eye.)

She wasn't always blind. When Kaya was four she developed glaucoma in her right eye. She eventually lost sight in that eye. We continued with daily eye drops to contain the swelling and reduce the pain from inflammation. But after a few months it became obvious that the drops were not working. The eye continued to swell.

So we decided that surgery to remove the eye was the best option.

We continued to give her daily eye drops for the other eye. Eventually she lost sight in that eye as well.

For the past two plus years we have given Kaya daily eye drops in hopes of saving her remaining beautiful blue eye.

But the eye drops have lost their potency.

So today Kaya will have surgery to remove her eye.

In some ways this is a sad day. Part of me wishes that this was not Kaya's life.

But Kaya reminds me each day that setbacks and roadblocks and difficulties are a part of life. You accept them and continue to move forward.

Every Friday Kaya goes to Doggy Day Care. She bounds into the car, she eagerly enters the facility, her tail wags and her head bobs as she is lead to the back. She plays with the other dogs. She loves her time there.

Sure she bumps into walls. She occasionally finds herself all alone as the other dogs wander off without her knowing it.

But she still loves going.

At home she goes in and out of the house on her own. She wanders our yard by herself - wearing her Invisible Fence collar. She goes up and down the stairs to our deck. She hides her bones in the bushes.

She still tries to sneak up on birds that she hears. She has even caught a possum that wandered into our yard.

In the house, she knows the location of her favorite chair. She can navigate the hallway and jump onto our bed.

When we take her for walks she leads. 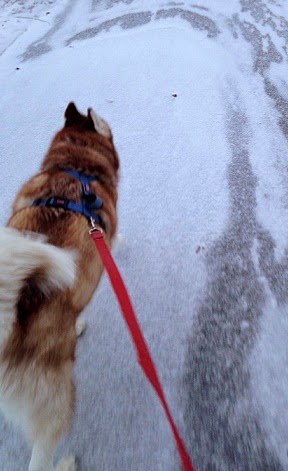 Kaya continues to live her dog life - and as far as I can tell she continues to be happy and healthy and involved.

Is her life different than what it was? Undoubtedly.

I am grateful to Kaya for reminding me of that every day.
Posted by Steve Matthews at 10:31 AM No comments: Links to this post